← It’s Showtime ….
Celebrating Culture in ‘The Boogie Down Bronx’ →

The Return of the Broadway, FELA!

FELA! has once again returned to Broadway at The Al Hirschfeld Theatre to share the electrifying story of a man who played a pivotal role in igniting young people through socially conscious music about the  government in Nigeria. Based on the life of Fela Anikulapo-Kuti, the play takes place in the late 70’s during the peak of Fela Kutis’ status as an influential composer and political activist.

The opening act begins at the Shrine club were Fela, who is played by Adesola Osakalumi, invites the audience to feel the energy of the venue by encouraging a “Yeah, Yeah!” from the crowd and explaining the house rules for the club. Sharing through musical lyrics the story of the Nigeria’s military dictatorship, he later gives the audience dialogue in further detail explaining the Shrine’s crowd opposition for the government.

The play then directs the audience to a musical journey sharing Fela’s mother’s involvement in his life prior to her death, the discovery of his musical genome and how he infused the music learned through education and other composers to form Afrobeat, a fusion of Jazz, Funk, African Rhythm, and Harmonies. The live band gave a galvanizing performance through the musical affair. From bass guitar to saxophone, trumpets, drums, and vocals, the instrumentation gave the audience an electrifying shock of musical impressions to capture and feel the Afrobeat energy. Indeed, as Fela states, “Music is powerful”!

Through a personal quest to follow stardom and other adventures, Fela shares his story on how he desired fame in the states. Traveling from NY to L.A. he embarked to some of the biggest cities in America. It was in L.A. where he discovered Sandra, who is played by Paulette Ivory, a participant in the Black Panther Movement who introduced writings of different activists and sparked his political rebellion which allowed him to compose music addressing political expression among the young people; sparking a revolution back in Nigeria.

His story reflects triumph and courage. The stage setting even showcased the culture and gave the audience a real outlook of the journey Fela experienced. He shared through music how the Nigerian government treated the people of the land and his feelings towards the treatment. The cast also did a phenomenal job in telling the story through dance and fashion. While many of the cast did not have a speaking role, the movements they expressed told the audience how they felt.  Theatergoers not only had the chance to learn about the story of Fela. They could have learned a dance, fashion, music, and even some of the language spoken throughout the play. It was an experience for everyone to enjoy and take part of. This play is a definite must see! As Fela would say, “Yeah, Yeah”! 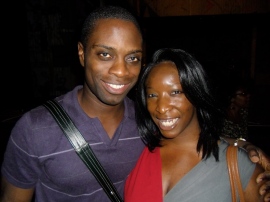 “It would be inadmissible if I would vent my opinion publicly. Not only could I harm the artist concerned seriously because people have so much respect for me and believe in me because of my musical accomplishments. And I could also antagonize people against me, because everyone has his own taste. We all make music, people can choose from that what they like. Every musician likes his own music the best, man. I don’t want to attack that. I don’t mind criticism, I can handle it, but most people can’t”.
-Fela Kuti

← It’s Showtime ….
Celebrating Culture in ‘The Boogie Down Bronx’ →