Let’s Pause for a Cause with Joyful Joy

With so many events going on in the city, it’s always exciting to be on the scene where there’s a party with a purpose! On Tuesday, May 22, Joyful Joy Foundation was launched at the XL Lounge in New York, NY. Osas Ighodaro, actress and former Miss Black USA 2010, founded Joyful Joy to sustainably transform the lives of people living under the poverty line in Africa, one community at a time.

The event was hosted by Osas Ighodaro along with AJ Calloway, Extra TV Correspondent, who united a crowd that appreciated the cause of the organization and culture of those in Africa. Many attendees came through to show their support from professionals, celebrities, elected officials, and notable figures in corporate and non-profit sectors. Some even participated in a raffle and silent auction which had valuable treats such as tickets to see Sister Act the Musical on Broadway and a chance to go to the Beyonce concert which was held in Atlantic City.

The program was indeed a treat! With dancing and drumming from African and Native Indian cultures, the audience had the chance to capture the spirit of their traditional movements. In addition, there were special guest performances by Brianna Colette and Greg Banks who graced the crowd with electrifying tunes. To end the evening music was provided by DJ Jon Quick, DJ Mike Neeze, and DJ Pollux Star, who took us on a musical journey from old school to current hits! 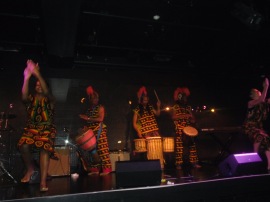 Being able to help others who are less fortunate is the greatest gift in the world. In return, it keeps a cycle going where we are making the world a better place! Now, that’s something to celebrate!

Live simply that others might simply live.  -Elizabeth Ann Seton

Posted on May 26, 2012, in Empowerment, Music and tagged adventures of all that jazz, africa, aj calloway, celebrities, empowerment, entertainment, joyful joy foundation. Bookmark the permalink. Leave a comment.